On the occasion of the symposium in homage to Prof. Samir Amin in Dakar from 10 to 12 February 2020, Nouvelles Éditions Numériques Africaines (NENA) is pleased to announce the launch of the open access archive platform: Patrimoine Numérique Africain (PNA) (“African Digital Heritage”). http://patrimoinenumeriqueafricain.com:8080/jspui/

In this digital archive warehouse, a first “Community” was created, named “Social Change in Africa”, which includes the collection of the scientific archives of the influential Franco-Egyptian economist Samir Amin (1931-2018): articles, conferences, reports, courses, etc. NENA was his digital publisher and inherited his archives. This collection contains unpublished documents of high historical and scientific significance, such as an interview with Professor Amady Aly Dieng in which Professor Samir Amin explains his personal, intellectual and political career.

“I’m a political animal and I can’t separate my personal trajectory from my intellectual reflection (…). I would say, without false modesty, that I was an anti-Rostow before Rostow wrote his book on The Stages of Economic Growth. And I would also say that the positions taken by André Gunder Frank and Wallerstein were similar to mine. I’ve maintained that point of view. It has been the central line, the central axis of all that I have been able to produce as a reflection on the evolution of the world system, on the challenges of development, on the appreciation of experiences, whether socialist or otherwise, in the face of this challenge. » 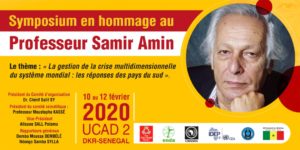 On the purpose of safeguarding and transmitting his writings to the common heritage of humanity and to future generations, these personal archives were offered to NENA two years before his death by Prof. Samir Amin, together with his personal library of nearly 4,500 books.

These books enabled the creation in Dakar in 2018 of a library focusing on development issues and African culture in general: the “Bibliothèque populaire du développement” was inaugurated by Pr Samir Amin himself on March 3, 2018, in partnership with ENDA Tiers Monde and the Rosa Luxembourg Stiftung.

Prof. Samir Amin is a renowned development economist and progressive intellectual whose global influence is considerable, particularly in Africa where he was at the origin of the creation of CODESRIA and ENDA-Third World. He is one of the authors whose complete works are published digitally by NENA (https://www.librairienumeriqueafricaine.com/content/samir-amin).

The Patrimoine Numérique Africain Platform (PNA) will be progressively enriched with historical and scientific documents such as research papers, theses, articles etc., from various fields.

Previous NENA at the Paris 2020 Book Fair
Next For educational continuity during the Covid-19 crisis: NENA joins forces with AUF to offer free access to its African digital libraries